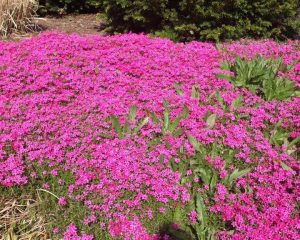 Known to most gardeners as garden or summer phlox, Phlox paniculata is a Mississippi native perennial that is a workhorse in the garden. For generations it has been transplanted from its native habitat into southern gardens. The typical bright rose-fuchsia flowers are still seen at old home sites across the south.

In my garden, the clump of glossy green foliage begins to appear from its winter dormancy in late January. By early May the multi-stemmed clump is nearly 4 feet tall and 3 feet wide with cluster flower buds visible. There are always a bloom or two open by Mother’s Day.

Flowers of the garden phlox are fragrant and provide ample nectar and pollen for butterflies, hummingbirds, hummingbird moths, bees and a vast number of other insects. From dawn to dusk, there is seldom a time that the panicle of flowers are not bobbing about with insect activity. If the flowering stalks are cut back 1/4 following the main bloom, they will produce smaller side blooms well into early September. Migrating butterflies arriving early in the fall will appreciate the effort.

One drawback of the garden phlox is that it is prone to powdery mildew, so it is advisable to plant it where it gets good air circulation, in full sun and receives average soil moisture with good drainage.

A mildew-resistant selection from a Mississippi population, marketed as ‘Robert Poore’, is a long-blooming robust plant with clean foliage, producing flowers that are the typical bright rose-fuchsia of the species. It is named for the Yazoo City native Landscape Architect, Robert Poore, who currently resides in Flora, MS.

Another mildew resistant cultivar that has been shared by gardeners throughout the Delta, but is believed to have originated as a seedling in North Carrollton, MS has been named ‘Delta Snow’. It has highly fragrant white flowers with a soft rose/purple eye. ‘Delta Snow’ reseeds freely and it comes true from seed. That is, the seedlings produce flowers identical to the parent. If cut back after its first bloom it will produce smaller side clusters of flowers until early September.

Online research will reveal a number of additional Delta garden worthy mildew-resistant selections. Additional information on the role of native phlox cultivars in the garden can be found here.

We use cookies to ensure that we give you the best experience on our website. If you continue to use this site we will assume that you are happy with it.OkPrivacy policy